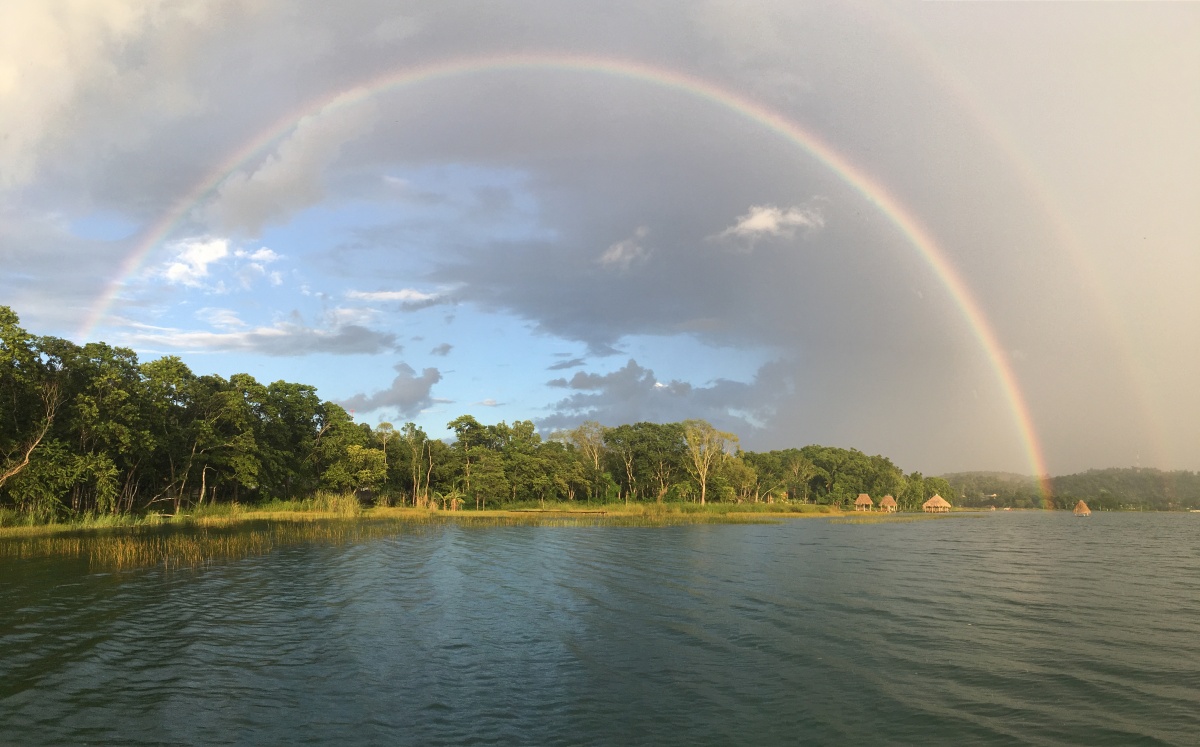 I may have found the most beautiful spot in all of Guatemala: a dock on Lago Petén Itzá across from the Hotel Mon Ami in El Remate. The dock juts roughly 15 meters into the depths of the eastern end of Lago Petén Itza and clears the water by only a few inches, giving someone standing near the end of the dock the sensation of standing on top of the lake as they peer across its glassy surface. From this perch, I observed several sunsets, a couple torrential tropical downpours (the end of the dock is sheltered from the rain by a tin roof), and one awe-inspiring rainbow this past week. Amidst the beauty of this spot and the general sublimity of El Remate, including the Cerro Cahuí Nature Preserve, I had some time alone this past week to reflect on my 2+ months in Guatemala so far. For much of this time, I found my thoughts drifting over moments I have shared with other travelers and a few stick out.

Back in September in San Pedro, my friend Ryan from Manchester, England, declared to me from behind kind eyes, “One really ought to offer complements like this more often, but we rarely do this for one another.” This was after he expressed his desire to tell Nadine before they parted ways ways that she is one of the genuinely funniest people he has ever met. Which is true — both that we ought to complement each more often and that our friend Nadine is hilarious. I never knew whether Ryan delivered this complement, but I know how Nadine would have responded: by insisting that her jokes really are much funnier in her native Swiss German. Despite this oft-expressed sentiment of hers, it did not stop her from providing my friends from the San Pedro School and I a near constant stream of wise cracks, witticisms, and playful jabs. Nadine speaks clear English with a bit of a Swiss German accent, which would cause me, from time-to-time, to interrupt her in order to clarify a word or two. After one of these interjections of mine, Nadine responded in playful frustration, “Reechard, what I said was very close. You really must use your imagination with me! Otherwise this will not work.”

Imagination is certainly something that my host family in San Pedro had to employ when learning how to interact with my other friend named Ryan in San Pedro. This Ryan, from Australia, moved in with my host family during our third week of Spanish classes. Ryan had spent a year and a half in Mexico as a dive instructor, and, between this time and his several weeks of class so far, had managed, against all odds, to learn absolutely no Spanish. However, he did insist with the host family that he was fluent in several Mayan dialects and would declare after every meal, almost as if to make fun of the very existence of the Spanish language, “muy deliciososososoooo!” Not knowing what exactly to do with this thirty-one year old man that seemed to mock the fact that the language of the household was Spanish, my host family took to calling him “el niño pequeño” (the little boy). (From what I understand now, el niño pequeno has progressed quite a bit in his Spanish.)

I have always been a bit skeptical of the idea that you can fundamentally change who you are or come to huge life revelations simply by traveling the world. However, there have been a few moments here where an interaction with another human has shifted my perspective in a real way. For instance, I was chatting with Dieske, a Dutch woman I met during my hectic first week in Guatemala, and she was describing how she would have to decide whether or not to go back to teaching full-time when she returned to Amsterdam. I asked her if she liked teaching, and she responded, “Well, yes, in fact, I do. When I was teaching back in Amsterdam, every afternoon after I finished teaching a class, I felt a little bit in love.” This description was striking, as I had never heard someone compare their day-to-day work so directly to the feelings of romantic love. I rather liked this description, as a person’s relationship with his or her day-to-day work is one of the most significant relationships in life, and one ought to feel at least “a little bit” of love in it. I was encouraged that Dieske’s sentiment was not just the idealistic dream of an eager university student but reflective of a reality that she has experienced. This moment caused me to pause as I recognized that my hopes for my day-to-day work when I returned to the States fell short of what Dieske expressed, and although not exactly life-altering, this interaction has nudged my thinking on the topic away from cynicism and towards hope.

It is interesting that the snapshots of genuine human interaction are the moments that already seem to stick out to me the most in my memory, but they are the most difficult to recapture in photographs or my daily travel journal that records the events of the day. And I think I like it this way — it’s almost as if my mind knows that these are moments that it alone is responsible for capturing, storing, and keeping sacred in memory.