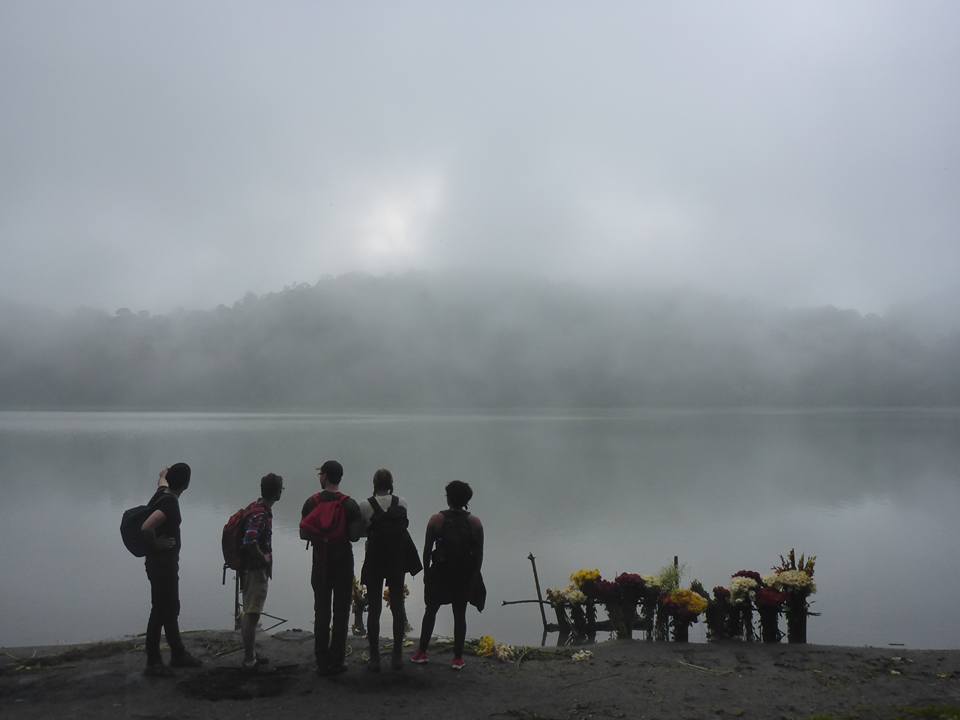 I ended my third and final week of Spanish class at PLQ on Friday (seventh overall including my time at San Pedro School), and for a moment on my last day of class, I believed that I had reached a true Spanish language breakthrough. The moment came during the weekly “Que Pasó in Guatemala” roundtable where students and teachers meet for an hour to discuss Guatemalan current events — in Spanish, of course. Amaro, a school coordinator who was leading the conference, kicked things off by asking if students had anything they would like to discuss. The several seconds of painful silence that ensued proved too difficult for my extroversion to handle, so I piped up and said “La economía de Guatemala.” Amaro turned his gaze towards me and asked, “What about the economy?” I mentioned that I had read an article about the state of the Guatemalan economy earlier that week in the Prensa Libre and thought we could, maybe, discuss that. Amaro replied that he had not read that article, so it would be great if I could explain in detail what I knew about the current state of the Guatemalan economy. At this point, considering the entire exchange was occurring in Spanish, I realized I was probably in over my head. However, I could not think of a better way out of the situation other than to dive headfirst into these murky, Spanish language waters. I began speaking and was surprised by how quickly and easily the words tumbled out of my mouth. Over the course of two, maybe three minutes, I summarized the general state of the Guatemalan economy, rattled off several factors that were barriers to Guatemalan economic growth, and offered commentary on each factor. At the end of this impromptu speech, I let out a long breath of self-satisfaction and thought to myself, “Wow. Just wow! I am great at Spanish, basically fluent. Everyone here just must be so impressed!” However, it was only then that I noticed the silence. And then the confused look on Amaro’s face. And then the blank expressions on the faces of the other students and teachers in the room. I then asked Amaro, hopefully, “Do you understand?” Amaro’s confused look then changed into one of amusement, and he replied with a chuckle, “Umm…a little bit,” indicating that his incomprehension was due more to the ridiculous version of Spanish I had just spoken rather than my superior technical knowledge of Guatemalan economics. Amaro’s in-depth, follow-up spiel on Guatemalan economics — accompanied by head bobs of comprehension all around the room — confirmed that my “breakthrough” was not in Spanish, but, rather, in my own, unique language that sits somewhere in the great abyss between English and Spanish.

Despite this somewhat humiliating experience, PLQ still allowed me to graduate Friday evening at the weekly graduation dinner. Every Friday evening, PLQ hosts this graduation dinner for all students and teachers. The dinner has been one of the highlights of each week here as it includes piles of food (students and teachers alternate weeks that they bring food), an authentic Guatemalan mariachi band — made up of PLQ teachers and friends — to lead us in rousing communist anthems, and plenty of Gallo and Cabro (the Guatemalan national beers). All departing students are invited to give a speech or sing a song, so, given it was my last dinner, I once again risked public humiliation and stood up in front of forty of my new best friends to deliver a short speech that was, thankfully for the listeners, prepared beforehand as to align more closely with the actual Spanish language than the speech I had given earlier in the day. Two other students who have become my compañeras in adventure, Marije and Jasmine, also delivered well-prepared speeches. However, another speech stole the show. It was delivered by Ron, a Catholic missionary in his 60’s or 70’s from New Jersey, who quickly had become a fan favorite among the students given his cheerful, grandfatherly demeanor and his enthusiastic participation in all student activities (including soccer, post-soccer beers, volcanic baths, and chicken bus rides). In his speech, Ron described his misadventure this past Wednesday during a school trip to Zunil, a local pueblo built into a mountainside near Xela. During the trip, Ron got separated from the group on the way back from the cemetery, which is located at the highest point in town. Ron walked all the way down the mountain alone, and when he did not find the rest of the group at the bottom, took a tuc-tuc back up the mountain. However, during this ride, he missed seeing the group coming back down the mountain and then, seeing that the rest of the group was not at the top either, in a panic, ran back down the mountain into the arms of a worried group of students that immediately began cheering his return. Ron could barely contain his delight in recounting this story in his first-year Spanish at dinner, and as peals of laughter rolled through the students and teachers, Ron went off script to describe the current size of his corazón.

In addition to the graduation dinner and Spanish language speeches, my final week in Xela also included a trip to Volcano Chicabal — a nearby volcano that features a lake on top and a drunk, blabbering local at the bottom — and Zunil — the local pueblo mentioned above whose cemetery was a colorful, spirited site to behold on Día de Los Muertos on November 1st. Finally, I played hooky from class for a few hours on Monday to take to the streets to to witness Stage 8 of the Vuelta de Guatemala and root on Manuel Rodas, Some of the pictures below capture these last few days in the Guatemalan Highlands.

As my time in Xela (Xelajú in full Mayan form) has come to a close, I am looking forward to transitioning from a “dedicated” student to a wandering, Central American traveler, doing my best to convince locals that, despite physical evidence to the contrary, I know a bit of Spanish and would prefer the Spanish as opposed to English version of the menu, please.

Next up, New York City comes to Guatemala for a nine days in the form of one of my best friends and travel companions, Newman Granger.