“Much gusto, Richard! Bienvenido a mi familia!” said a smiling Elsa, the matriarch of my new Guatemalan family, as she showed me my new, personal veranda overlooking Lake Atitlan here in San Pedro La Laguna. Struggling to grasp the Spanish word for “view,” I resorted to, well, the English word for “view.” “Esta…uhhh…view…es muy bonita!” Elsa smiled knowingly, looked out towards the lake, and proclaimed “la vista!” And so my Spanish immersion attempt begins, one conversation in broken Spanish at a time.

My arrival at San Pedro La Laguna this afternoon was preceded by an action-packed last 24 hours in Antigua which began with a rousing cultural and historical tour led by the resident historian, Elizabeth Bell. Bell is no amateur historian —  she’s published multiple books on the history and culture of Antigua which are for sale all over town (this includes at least two coloring books of major Antigua sites which demonstrates the depth of the woman’s passion for this former Guatemalan capital). The tour began strong, as Bell showed us around the major sites off the Parque Central and pummeled us with her knowledge of all things Antigua (history, politics, religion, current events, and fun facts, i.e. the 1938 Tarzan movie was filmed in none other than Antigua). However, this momentum came to a screeching halt about an hour and half into the tour as Bell ushered us into the Jade Museum. For those of you who don’t know, jade is a precious mineral found in Guatemala that is popular in jewelry. Then there is a lot of other boring stuff about jade that the Jade Museum covers in detail. After about 45 minutes of that yawnfest of a museum, Bell did capture a bit of the momentum back at our final stop on the tour, the Casa Santo Domingo. The highlight of this stop was a crypt that includes exhumed human skeletons from the 16th, 17th, and 18th centuries. Pretty cool stuff.

As evening approached last night, I debated whether to have a quiet dinner and call it an early night or head back to Cafe No Sé to see if my new bartender friends had anything going on. I opted for the latter given that the first option felt like defeat. Sure enough, Cafe No Sé did not let this wandering soul down. Marissa, an American teaching at a local school that works at the No Sé on the weekends, invited me and my other new friends from the bar (a gay couple from San Francisco down for a long weekend) to a local salsa event. Given that “I know how to do salsa” (said the mezcal in my body at that moment), I agreed and found myself in a school gym with several hundred Guatemalans that were absolutely ripping up some salsa. There wasn’t too much for a gringo like me to do other than watch in awe at the scene, which was highlighted by a legitimate salsa performance by locals in costume. I did make a brief foray onto the dance floor which ended with a small, personal victory in the form of a “compliment” from Marissa. (“I thought you would be terrible at salsa and you actually weren’t terrible!”). After a few hours of this otherworldly salsa scene, my new friends and I ended the night back at the No Sé  in a scene much more familiar to me — in a crowded bar, singing along at the top of our lungs to “Proud Mary” by Ike and Tina Turner.

I pulled out of Antigua in my shuttle this morning around 8:30 am, feeling satisfied about my three days there and properly launched into this adventure. The four-hour journey from Antigua to San Pedro La Laguna only helped to build my excitement for what lies ahead as I listened to the wealth of travel stories being recounted by my shuttlemates. And as I now find myself living with Elsa, Bartolo, Juanita, Elsita, and Bartolito, I am interested to see how the next chapter of my own story unfolds. 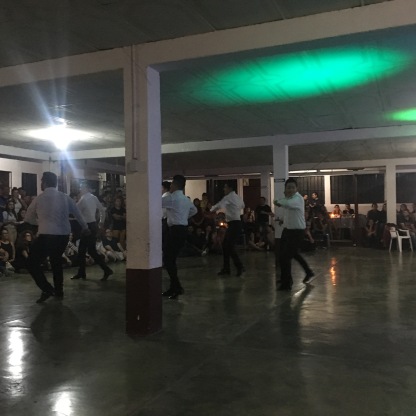 The view from my new home in San Pedro